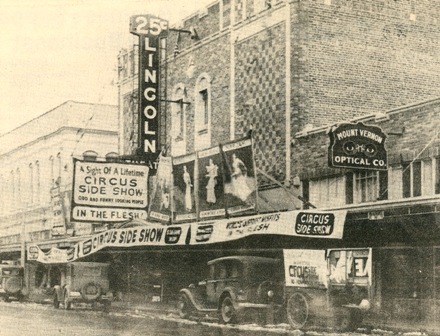 A picture of the Lincoln Theatre facade in 1926.

The earliest recorded settlers in what would later become ‘Mount Vernon’ were Jasper Gates and Joseph F. Dwelley, in 1870. These two likely stopped in Mount Vernon because the Skagit River was not navigable beyond this point due to enormous log jams. In 1876 the log jams were removed permitting river travel to the towns that had grown upriver from Mount Vernon. With the river being opened new logging activities and access to Ruby Creek (where gold had been found) were both possible. These two events reinforced Mount Vernon’s position as an important transportation and trading center along the river.

Whatcom County was divided in 1883/1884, and its southern portion became Skagit County. In 1877 Harrison Clotheir purchased five acres (although some sources state it was 10 acres) from Jasper Gates along the riverfront for $100.00.

This riverfront property was platted by Mr. Clotheir with a town site that he named ‘Mount Vernon’ in recognition of George Washington’s Potomac River estate. This first, original plat, was never dedicated or recorded; however, a second plat was in 1885. View a copy of this plat; and other plats that were also recorded around this same time frame. Clotheir, and his business partner Edward English developed and ran the first general store in Mount Vernon. Between 1891 and 1900 there were four major fires, with the last one destroying the original town site.

Mount Vernon was able to beat out LaConner and Anacortes to become the County seat in 1884; and was incorporated six years later on June 27, 1890 (the incorporation petition and associated documents were received and filed with the Secretary of State on July 6, 1890).

In 1912, the Sanborn Map Company lists the City population at 2,600. View ten maps that Sanborn created for the City at this point in time. These maps identify buildings that existed, what they were constructed of, and other related details.

Along the Skagit River, between the City and the sound there was at least 15 streamboats documented in 1889. The Great Northern Railway finished construction of their rail line through Mount Vernon in 1891. There were major floods in 1892 and 1894 that motivated the construction of a massive levee system in 1894. These floods were likely also the reason that homes began to be constructed on ‘the hill’ as it was referred to then and now. As the residential population began to shift to the hill, other public buildings including Lincoln and Roosevelt Schools were also constructed there.

In 1960 the City’s first Comprehensive Plan was created and adopted. Copies of this document are available are the City Library and at the Community & Economic Development Department.

The 1970s marked the first large scale increase in the City of the City with an annexation of 2.32 square miles. View a map that identifies all of the annexations that have occurred within the City over time.

There have been a number of books written that document the history of Mount Vernon. Following is a list of some of these books and other resources where information on Mount Vernon’s history can be found:

The Illustrated History of Skagit and Snohomish Counties

Their People, Their Commerce and Their Resources with an outline of the early history of State of Washington endorsed was authentic by local committees of pioneers published in 1906

Chechacos All: The Pioneering of Skagit - 1973 by a committee of the Skagit County Historical Society, Margaret Willis, editor

Skagit Memories: stories of the Settlement years as written by the pioneers themselves
Charles M. Dwelley, editor, Helen May Dwelley, assistant editor. 1979